Near the Cambodian border, hiding the road grader in a ditch to protect it from enemy shells.

He quickly learned the art of being a dealer, like Milo Minderbinder in Catch-22, occasionally draining his fuel tank to get pot, a “high quality rain suit” or a tubeless tire patch kit, particularly important because he was getting a flat at least once a week. “My high point came when I negotiated steak and ice cream for roughly for three months of Sunday dinners in exchange for fixing the drainage on a … (food) storage yard.”
In December, his group was assigned to help construct a Special Forces base near the Cambodian border – close to the trails that North Vietnamese soldiers used to infiltrate the south.

"I DIDN'T TAKE MY BOOTS OFF FOR TWO WEEKS"

Attempts to clear the jungle led immediately to enemy barrages. The first night, the nervous engineers fired their M-14s into the darkness at the perceived enemy locations, not thinking of the Special Forces set up on the perimeters. The next morning, a pissed Special Forces officer said some of the M-14 rounds had hit his men and if happened again, his guys would turn around and fire at the engineers.
“The fighting was so continuous that I didn't take my boots off for two weeks,” he writes.
Everybody was jumpy. A soldier on the back of a truck extended his rifle so his buddy could grab it and leap up on the truck. Without thinking, the soldier kept his finger on the trigger and when his buddy grabbed the barrel, his finger squeezed, killing his buddy with a shot to the chest.
Ingalls heard bullets whiz past him – like the sound of buzzing bees – but road graders operated in areas that had already been cleared of vegetation. Much more exposed were the operators of the Rome plows, assigned to knocking down the jungle to make a clearing, with the enemy often lurking a few feet away.
“A plow is the most hazardous duty in Vietnam for the engineers … they're easy to ambush and because of the noise made by the plow, the operator can't hear anything.” The Rome operators tended to misfits, “people who don't get along in the army at all. Ex-Hell's Angels, guys who get in fights all the time.”

When he arrived, his assigned machine was inoperable. He figured out how to fix it himself. “I was getting paid to operate a road grader, and I did the very best I could at all times. I had a job to do and I did it. Being totally against the war, and shirking work, are two different topics for me.”
SOLDIER OF THE MONTH?
Not that the work always made sense. Once an ornery sergeant ordered him to cut a drainage ditch right across a road used by Vietnamese workers. The workers were puzzled/angry about having to walk around the swampy ditch. When the sergeant left, Ingalls filled the ditch back in. “I also fixed drainage problems for the local farmers when they needed help, which I think went a long way toward keeping me alive.”
But he also learned not to carry tools on the grader – because kids stole them from the tool box.
In October 1967 – just his third month – he was named Soldier of the Month for his company, but his relationships with superiors quickly deteriorated. “I just

Some 58,000 American soldiers died protecting South Vietnam – a country that ceased to exist after the United States finally conceded defeat. To put that in perspective, 4,500 Americans have died in Iraq and 2,400 in Afghanistan in the decade-plus we've been mired in those two countries.
We were roommates at the University of Colorado. He was a bright guy who didn't march to anyone else's drummer – the kind of student who doesn't automatically parrot back what instructors wanted to hear. He might read Thomas Wolfe for the fun of it, but blow off a lit class because he considered the prof pretentious. After several years, he had a grade point of something like 1.95, and the university informed him that since he didn't have the required 2.0 he'd have to sit out a semester or so.
In the mid-1960s that meant one thing: Vietnam.
Rather than become a canon-fodder draftee, he decided to enlist for three years, so he could choose a specialty that would (in theory) keep him out of harm's way. He ended up driving a road grader for the 362nd Engineering Company.

The self-published book is Snakes, Rain and the Tet Offensive: War Stories with Photos, based on 50 letters he wrote to his then-wife Faith Rogers, with some later-day commentary added, and 274 photos he took with a used East German 35 mm he bought for $15.
His letters pull the reader directly back to the moment, as his discussion of family finances:“You should get about $210 or so this month,” after he takes $40 in cash for his expenses. He writes he could get another $40 a month if he's promoted to SP-4, but “I refuse to kiss ass for it.”
No glorifying the war for him. As he put it in the introduction: “It was an ugly war without a real reason for being beyond the political hysteria of the time. I hated it then, and I hate it now. When I visited the Vietnam Veterans Memorial in Washington, I cried. It could have been me with my name on that wall.” 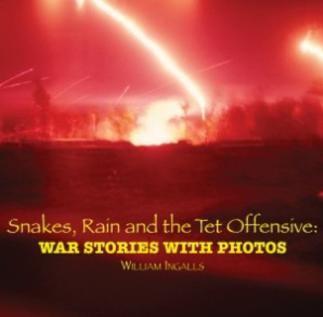 In late January, the area quieted down. Ingalls didn't know it at the time, but the enemy troops were done moving south and were now attacking South Vietnamese cities across a broad front during the Tet Offensive.
The lull didn't last long. One day a convoy was ambushed about a mile from camp. A young sergeant rounded up 11 guys to rescue the wounded. “He told me to climb aboard as well, but I refused, citing the first commandment of all heavy equipment operators – never abandon your equipment when attacked. He was pissed, but I sensed that what he was doing was seriously wrong. All the guys on the truck looked frightened. They had no idea what to do.”
The truck stormed straight into the ambush. All were killed. “They never even got a chance to get off the back of the truck. Stupid waste of life.”
Americans were dying all the time, of course. Only one incident Ingalls witnessed became a news story. It concerned a Rome plow operator named Thomas Van Putten. At the time of the ambush, he had only a week left in country, and a buddy offered to take his plow assignment. Van Putten ended up in the convoy as a gunner on a scraper. The Viet Cong captured him. A year later, an emaciated Van Putten appeared: He'd escaped after being a prisoner for a year, serving as a VC mule.
By that time, Ingalls was back in Boulder, where he graduated with a degree in history. The marriage didn't last. “I can't say that the Army destroyed my marriage, but something did, that's for sure,” he writes in a postscript. “By the time I got out of the army I knew it wasn't going to last, and we called it quits within three or four years.” 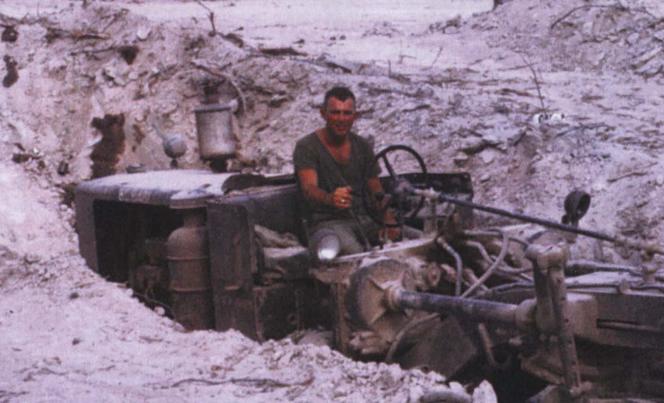 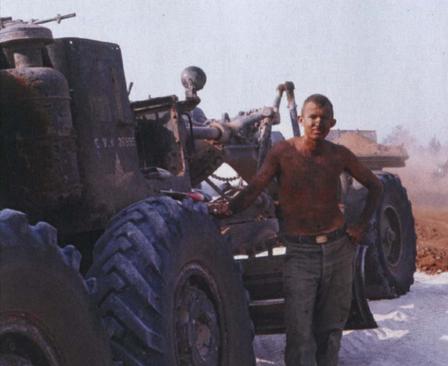 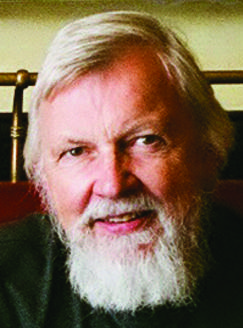 An Astonishing New Book about Vietnam

My best friend in college, Bill Ingalls, has just published an astonishing book about his year in Vietnam. It is insightful, harrowing, occasionally funny and utterly frank – an account of a onetime Soldier of the Month getting by with pot, booze, a defiant attitude – and a bit of luck.
He operated a road grader – sitting six feet above the ground, a perfect target for any sniper – especially during a nerve-jangling stretch near the Cambodian border when he helped construct a Special Forces camp. In between, his Army life often consisted of  “backbiting, threats, bribery and blackmail” – while wheeling-dealing, trading Philippine army guys diesel fuel in return for pot.

Ingalls in 2014: He's still a car buff. This 1929 Model A was handed down to him by his father. He recently  gave it to his daughter Ursula. 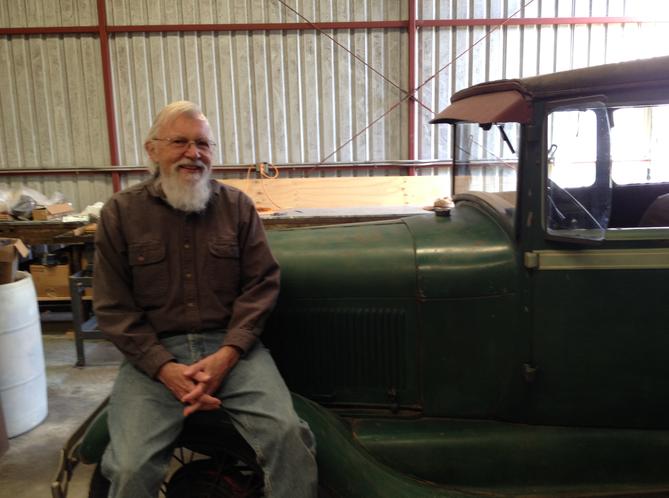 He became a small businessman, specializing with considerable success in niche corners of the auto industry. He's now retired, living in California. Deb, his wife of 37 years and a professional typesetter, helped design the book. (I was among a bunch of people who gave him him advice on the first draft, and he rewarded me with a free copy.)
The first edition is a mere 150 copies. The price is a hefty $90 – because of the huge expense of printing color photos. It's available at www.warofwords.co – with free shipping.
UPDATE: The book is now available through Amazon.com.
If that sells out, he may think of a larger, cheaper hard-copy edition, or an electronic color edition. Electronic would lower the price to $9.99, he says, but because of the size of the pages and photos, it likely would need to be read on a desktop.
I was fascinated by his accounts of the absurdity of the war, but the book could attract a completely different readership with the photos and accounts of all the heavy construction equipment. Though they sometimes broke down under brutal conditions, the machines were pretty damn tough. (An enemy shell once knocked an inch-and-a-half hole through an engine block and the damn thing kept going.)
He hasn't lost any of his old individualism. In this age of Youtube and videos everywhere, he's built a full-fledged sound studio in his garage, producing (among other things) movie-length radio dramas and much shorter book reviews that he's marketing to radio stations..