Jungle Island, Miami's long troubled amusement park, has hired an investment bank and is "considering options," owner Bern Levine said Monday.
Responding to questions about a rumor that the park was being sold, Levine said, "That's not correct."
He said, "We hired an investment bank months ago seeking partnerships." The outcome of this search "just depends on what different options come up." But he did not specifically rule out a sale as a possibility.

in these future plans. Iconic Attractions Group, the park's management company, has been in talks with multiple firms who share a passion for Jungle Island and an unwavering commitment to the Greater Miami community. At this time, nothing yet has been formalized."

Levine purchased the attraction in 1988 when it was in South Dade and known as Parrot Jungle. Its move to centrally located Watson Island was expensive -- costing about $57 million -- and returns weren't immediately coming. Expecting a $1 million profit in 2003, the park suffered a $2.6 million loss.

In 2013, the city's inspector auditor general reported that Jungle Island's own accountant “expressed doubt of its ability to continue as a going concern.”
That same year, Levine brought in Dunlap, who had been operating the San Diego Zoo.
Dunlap announced a grand makeover that would convert the facility into an adventure park, including customers floating through a winding river, spending time on a beach and a zip-line. “We have a bunch of plans to get people wet all day,” Dunlap said at the time.

He told the Biscayne Times last fall that most of the improvements had already been funded.

UPDATE: The  BT cover article, by this writer, stated: "The changes are definitely happening, Dunlap insists. The new beach area and the orangutan restaurant will be 'done by the first quarter, come hell or high water.' " But since then the park has made no further announcements about the new beach or restaurant.
Levine said Monday that Dunlap continues to manage the day-to-day operations of the park. Much of the park's income at present comes from leasing its banquet facilities, which are close to downtown Miami.

If you have a comment on this article, email it to miamiwebnews@gmail.com. 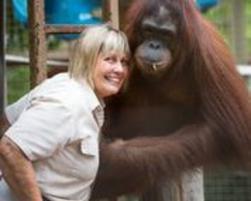 UPDATE: In early afternoon, John Dunlap, Jungle Island president, issued a statement: "Last year, Jungle Island shared its plans for an exciting transformation of the landmark attraction. The natural evolution of this process is to bring in equity capital partners along with the existing ownership to help invest