John Dunlap, Jungle Island's new president, has managed to boost admission revenue while slashing labor costs by 40 percent, but the long-troubled tourist attraction still showed a net operating loss of $813,435 for the first eight months of this year, 51 percent worse than the loss for the same period last year.
Dunlap, 37, was brought in last year from San Diego to transform the property, and he's announced plans to create a “real jungle experience” for tourists, including swimming, zip lines and a beach. “Our goal is to be Miami's water attraction,” he said in a cover story by this reporter in the Biscayne Times October edition, entitled The Long, Dismal Saga of Watson Island, available HERE.

After publication of the BT article, the state spokeswoman said that upon further checking Jungle Island didn't need a perimeter fence because the “cats currently at the facility are there in travel status only.”
The tigers are owned by an outside company, but Shimonski, who left earlier this year after almost 40 years with the attraction, says “I'm not sure how one would define 'travel status.' The cats are there for years. Occasionally one is moved for health or other concerns.”

Bahar Bayarktar, director of communications for Flagstone Property Group, sent a statement on Wednesday: “Construction of Island Gardens started earlier this year, encompassing multiple projects including the development of North America's first super-yacht marina and a multi-acre public use waterfront art park, all of which will be major engines for economic growth, community development and tourism for South Florida. We are excited about the progress, which will help create thousands of jobs to the local economy, and bring in millions in economic impact.”
She said the construction project could pay over $500 million to workers. “When doors open in 2017, Island Gardens will create 3,000 jobs, providing approximately $72 million in wages to local residents and afford millions in additional revenues” for city, county and schools.
A far less upbeat view is held by the Coalition against Causeway Chaos. Two of its members last month sued the city, saying that political leaders had violated their own charter in allowing Flagstone to pay less than market value rent for its Watson Island holdings.
The lawsuit, filed by Stephen Herbits and Sharon Kerby Wynne, complains that the city's own reports show that Flagstone should be paying more than $7 million in annual rent when the project is completed, not the $2 million the contract calls for.
Flagstone has been planning the long-delayed project since 2001, when it first signed a deal with the city.
Critics have complained that the Flagstone development really isn't under way yet, with the company only doing some underwater surveying as it prepares to dredge for the marina. 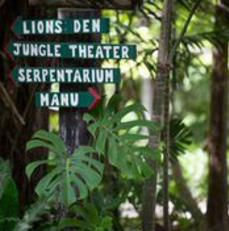 "jungle Island is healthy and thriving,” a spokeswoman said in an email Wednesday morning. “While year-over-year admissions were up through August, a host of new (2014) special events and programs have been implemented which has driven down current year profitability.
“However, all of these initiatives are expected to make a positive impact to the park in the years to come. As an example, we recently transformed an un-groomed and underutilized parcel of land into a spectacular sandy beach with a floating aqua park to take advantage of Jungle Island’s prime location on Biscayne Bay and to expand the average length of stay,” the spokeswoman said. “The installation came at a one-time cost of over $300,000.” 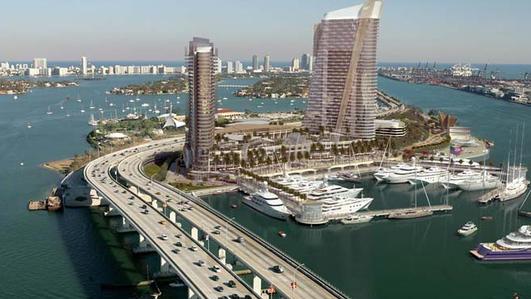 Meanwhile, another major player on Watson Island, Flagstone Property Group, has filed a motion to intervene in a citizen's lawsuit against the city that is intended to block the development, and a Flagstone spokeswoman has come forward to say the proposed Island Gardens project has many positive elements.
At time of publication of the Biscayne Times story, government sources had not responded to two requests for information: The city of Miami on Jungle Island's financial reports and state wildlife regulators on the attraction's perimeter fencing requirements. Both entities have since supplied the requested reports.
State regulators say that Jungle Island doesn't need to meet many requirements because the tigers caged there are only temporary, even though most of the cats have been there for years. More on that later.
BIG SAVINGS IN OUT-SOURCING

The Jungle Island financial reports provided by the city reveal major changes since Duncan took over in June 2013, although most changes didn't start to show up on the financials until the start of 2014.
The biggest move was out-sourcing many of the park functions, including food concessions, the banquet hall, gift shot and photo shoots. The records show that Ovations, which runs the food and banquet operations, pays Jungle Island 30 to 35 percent of its revenues while picking up all food and labor costs.
Deals like this have dropped the park's employee costs – including wages, benefits and worker's comp – from $4.24 million in the first eight months of 2013 to $2.53 million for the same period in 2014.
“Overall cost and the number of jobs provided to the local economy is largely unchanged,” the spokeswoman said. “We have a joint venture agreement with Ovations. All employees under Ovations are Jungle Island employees. ... No Miami based Jungle Island jobs were lost with the shift of these services to third party suppliers. In fact, Jungle Island’s plans to add new attractions to the park will result in job creation.”
The financial report doesn't mention how many people the attraction employs – a crucial issue because Jungle Island received a federal loan of $25 million to build the facility – on condition that it employ at least 603 people, according to county officials.
Dunlap told Biscayne Times that the park is in full compliance with its loan promises but didn't provide exact employment figures. “We expect that Jungle Island will be forthcoming with that data,” the county told Biscayne Times.
Another major change: Expanding special events. That helped boost admission revenue from $3.7 million for the first eight months of 2013 to $3.9 million for the same period this year.
One example: Winter World Island, which featured a beach snow machine. These promotions increased attendance – but at a cost. Special events expenses were $329,000 for 2014, compared to a mere $7,000 for the same period last year.
“We are putting a greater emphasis on special events in order to broaden our reach and attract new guests to the park,” the spokeswoman said. “However, both figures do not accurately represent special projects in the same category. We also introduced new after-hour events this year and brought in additional labor to service them. Examples include Africa Nights and the current Terror in the Jungle Halloween attraction, which employs 80 cast members.”
The financial report indicates that Jungle Island is current with its rent payments – paying the city $545,000 for the first eight months. 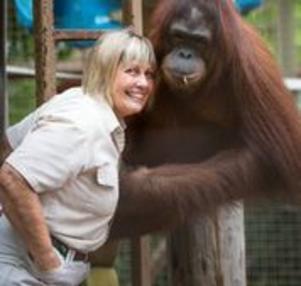 Because Jungle Island has tigers and other animals considered potentially dangerous, it is regulated by the Florida Fish and Wildlife Conservation Commission.
No state official was made available before the Biscayne Times deadine, but a spokeswoman said that Jungle Island was in full compliance with state regulations. She sent along a copy of the rules that indicated generally an eight-foot-high perimeter fence is required, but that older facilities, such as Jungle Island, don't have to abide by that rule.
Jeff Shimonski, the attraction's former vice president of facilities, said that while the fencing of the individual cages is strong, he was concerned that there were gaps in the perimeter fence. Dunlap says that, as a former zoo director, he understands fencing requirements and Jungle Island has no problems.

After years of struggle, Jungle Island is suddenly turning a profit on paper, but the huge swing from repeated losses appears to be due primarily to changes in the way it reports its finances.
Meanwhile, the other major tenant on Watson Island, Island Gardens, is still in search of financing after more than a decade on the drawing boards, and the mayor of Miami Beach is joining its vocal opponents in trying to shut the project down.
The financial reports of the self-described "Miami"s No. 1 family attraction," obtained through a public records request from the city of Miami, show that in September Jungle Island reported a year-to-date loss of $1.17 million. Its October report indicates it netted $301,432 for the month, while showing a year-to-date net income after allocations of $1.36 million -- a swing of $2.5 million in one month.

On the other side of the island, Island Gardens continues to make slow progress in creating a marina for megayachts -- the first step for a massive high rise development that was supposed to have been finished a decade ago.
Flagstone Property Group continues to looking for funding for its $700 million project. In September, Greenwich Group International, a major investment firm, said it expected to find investment partners for Flagstone "within two months." Greenwich did not respond to a recent query about the investors.
Flagstone spokeswoman Bettina Inclán Agen emailed: "Flagstone is in discussions with several prospective parties interested in investing in various components of this world-class development and North America's only super-yacht marina."
Inclán stated: "Island Gardens is on schedule and on pace. One of the first items set for completion at Island Gardens is North America’s only super-yacht marina. The first phase of the marina will be finished during the first quarter of 2015, with final completion of the marina being accomplished towards the end of the year."
Meanwhile, a judge has thrown out a lawsuit by some Miami residents who alleged that the Flagstone deal with the city violated the city's charter because it required only $2 million a year in rent when it should be paying $7 million, based on appraised property value.
A third amended complaint by seven residents, led by Stephen Herbits, was filed in late December. Among other charges, the lawsuit charges that the development would be a disaster for traffic moving along the causeways between Miami and Miami Beach. Their website is causewaychaos.org.
They're getting increased support. Miami Beach Mayor Philip Levine posted on his Facebook page that the Flagstone project "will be detrimental to our already fragile and overburdened traffic infrastructure namely traffic on the MacArthur Causeway. I will continue to oppose this project and have instructed our City Attorney to explore all legal remedies available to the City."

Spokeswoman Rachel Pinzur declined to explain what happened.  "As a privately held institution, Jungle Island does not discuss its finances or accounting practices."
Jungle Island is required to make monthly financial reports to the city because its revenue determines the rent it pays the city. In October, the rent came to $65,007, considerably higher than $38,216 paid in September, but park leadership has noted in the past that attendance fluctuates by large amounts depending on time of year. In October, admissions brought in $451,402, compared to $253,030 in September.
One notable difference in accounting:  In September, the park listed fixed income expenses year-to-date of $1.7 million. That included how much the park spends on interest for its loans and for depreciation. That category is missing from the October report.
Another item of interest: In October, Jungle Island earned almost as much money from its banquet facilities ($442,000) as it does in amusement park admissions ($451,000).
EXECUTIVE SHAKEUP
Jungle Island President John Dunlap continues to make changes in his management team, which has gone through considerable turnover since he took over in June 2013.
Recent changes: Christopher Gould, general manager of a Fort Lauderdale hotel, becomes managing director, dealing with day-to-day operations, replacing a staffer Dunlap brought with him from San Diego. Eric Eimstad has been named chief marketing officer, moving over from the Miami Seaquarium. Kevin Henderson, from the Minnesota Zoological Garden, is moving from snow-removal issues to handing tropical plants as he takes over as senior operations manager/facilities.
Spokeswoman Pinzur explained the changes: "Jungle Island is embarking on the largest endeavor undertaken in the attraction’s 78-year history. In doing so, Jungle Island has sought the very best leaders in the industry to help oversee park operations while the company's president remains focused on the master plan project."
Bern Levine, Jungle Island's lead owner, said he continues to have confidence in Dunlap's leadership. "He's doing great," he said in a telephone interview..