How Sweet It Is!

Just in time for Miami Beach's 100th birthday, novelist Thane Rosenbaum has produced How Sweet It Is! -- a tale of the Beach set in 1972, featuring the Posners, two Holocaust survivors and their son.
The book opens with a chapter in the voice of Jackie Gleason ("Everyone loves the fat man"): "Miami Beach is magical, but it is the magic of the dark arts. Black magic masquerading as enchantment."
Mob financier Meyer Lanksy gets his due, as does police chief Rocky Pomerance, the Republican and Democratic National conventions and, not least, a randy rabbi who frequented the Playboy Club and Hotel on Collins Avenue, "making out with bunnies, two at a time, right in the middle of the lounge."
But it's the Gleason character who gives the rant on fellow TV star Arthur Godfrey, deriding the politicians who named 41st Street after him. "Everybody knows that Godfrey ... was an anti-Semite who wouldn't allow Jews in his hotel, the Kenilworth, up in Bal Harbour. Here's a laugh, with a name like Kenilworth, he didn't let dogs in either. Imagine that: Miami Beach might be the only city in the country where the majority of its residents are Jews, and they name a street in the very heart of the city after the best known Jew hater in the country."
Four decades later, the name still stands.
Rosenbaum, a novelist and lawyer who grew up on Miami Beach in the '60s and '70s, is scheduled to speak at Books and Books in Coral Gables at 7 p.m. Saturday April 18.
The book, formally scheduled for release in April, is published by Mandel Vilar Press. 208 pages. $24.95. 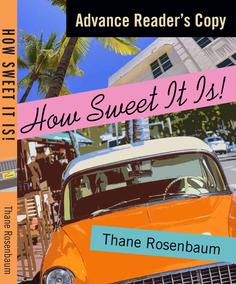